We were “blessed” with about 10 inches of snow overnight. Which promptly melted in the 50 degree temperatures of the rest of the day. 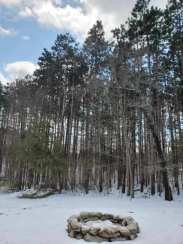 The Governor announced the end of the school year – at least in an actual school today.  We, parents, are required to finish out the learning year at home. I’m totally great with that…not….I suck at this.

There is a 3 stage plan to reopen the economy (which no state except for Idaho is ok with) that was announced yesterday.

So, basically the whole thing is GREAT.  Everything is FINE. We are all going to be OK. Nothing to see here.

I have nothing else to say.  Today basically sucks.

I’m not writing anymore today – because nothing goes away on the internet and I don’t want to be held responsible for my emotional outbursts at a later date.

News of the Day:

Over 2.2 million people worldwide have tested positive for the coronavirus, according to data from Johns Hopkins University. More than 149,000 people have died.

The United States has had over 683,000 confirmed COVID-19 cases and more than 34,000 deaths, leading the world in both numbers.

New York Gov. Andrew Cuomo unloaded on President Trump after the commander in chief criticized him for “complaining” about a lack of federal assistance.

Plan for the Day: