Hey all!  It’s been a while since I shared some things that I’m loving right now.  On tap today – a couple recipes, a couple books, and a couple podcasts that are making me happy right now.

But before we start – today is the first day of spring – and I had to wear a winter puffy coat because it was 30 degrees when I left the house this morning.  I’m not OK with that.  I just am not.  I think when spring – ah, springs – the temperature needs to automatically rise by at least 20 degrees, the leaves need to magically appear on the trees and my lawn should suddenly resemble Central Park in full bloom.  I’m aware none of these things have any chance of happening, but a girl can dream.

Recipes – I’m desperately trying to add new recipes to my dinner routine.  Taco Tuesdays are great, but sometimes you need to switch things up a bit.  Here are a couple I’ve found recently that were a hit with my husband (my child rarely eats anything I cook) AND made great leftovers (which is key because we are really trying to stick to the budget this year, and that includes bringing our lunches to work).  Both of these were found on Pinterest – but I will link to the original website for you if you would like to try them. 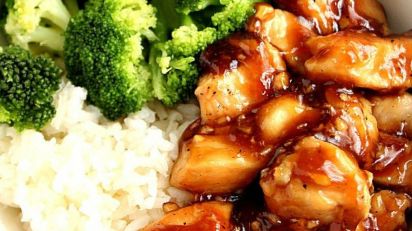 This one has made its way into our regular rotation.  It is super easy and yummy.  I doubled the recipe last time I made it and we had lunches for 3 days. Sometimes I mix the broccoli in with the chicken and sauce and sometimes I serve them separately.  The hardest part of this recipe is cutting the chicken up into bite sized pieces – because I HATE working with raw chicken.  But I bought these from Pampered Chef a few years ago, and they have helped a bit…

Also, the blog this came from has a bunch of what look to be easy Chinese takeout knock offs – I’ve not tried them yet, but I plan to.

This recipe calls for ham, and I’m sure it is great with that; but I had an Italian sausage in the fridge that needed to be used, so I used that instead.  I was worried the sauce would taste like flour because I struggle with sauces that have flour in them – so I whisked the flour into the milk before adding it to the skillet and that seemed to solve the issue.  Next time I make this, I will salt and pepper a bit more aggressively because it seemed a bit bland.  Also, may try to amp up the spices.  But as a starting point it was pretty tasty.

Terry thought this tasted a bit like a carbonara (although carbonara has eggs in it and this does not) and I agree.  It was REALLY good the next day.

Books – I’m well on my way to my 40 books in 2018 goal.  I’m due to finish up 2 more books this week which will take me to 9 and according to Goodreads I’m right on track.  Winning!  Here a couple books I’ve read so far this year that I would recommend (one fiction and one non-fiction) 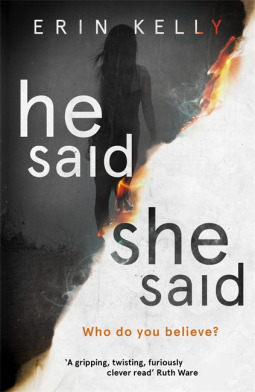 “In the hushed aftermath of a total eclipse, Laura witnesses a brutal attack. She and her boyfriend Kit call the police, and in that moment, it is not only the victim’s life that is changed forever. Fifteen years on, Laura and Kit live in fear, and while Laura knows she was right to speak out, the events that follow have taught her that you can never see the whole picture: something, and someone, is always in the dark.”

I’m a sucker for a book that keeps you guessing until the end; and this book comes through in spades.  I enjoyed it so much.  I will say, it starts a little slowly, which can sometimes make me abandon a book, but I stuck with it and the payoff was pure gold.

I also thought the backdrop of solar eclipses around the world was fun given last year’s solar eclipse mania.

The author is British and this is set in London, so sometimes pop culture or language differences get a little distracting, but you can maneuver through these pretty easily.

If you give it a try, let me know.

Devil in the Grove: Thurgood Marshall, the Groveland Boys and the Dawn of New America by Gilbert King (non-fiction) 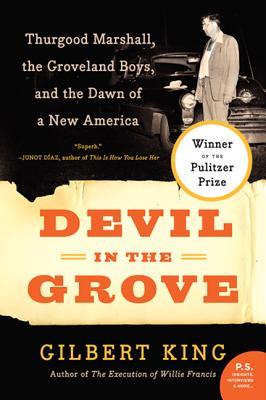 “Devil in the Grove is the winner of the 2013 Pulitzer Prize for General Nonfiction.

Arguably the most important American lawyer of the twentieth century, Thurgood Marshall was on the verge of bringing the landmark suit Brown v. Board of Education before the U.S. Supreme Court when he became embroiled in an explosive and deadly case that threatened to change the course of the civil rights movement and cost him his life.

In 1949, Florida’s orange industry was booming, and citrus barons got rich on the backs of cheap Jim Crow labor. To maintain order and profits, they turned to Willis V. McCall, a violent sheriff who ruled Lake County with murderous resolve. When a white seventeen-year-old Groveland girl cried rape, McCall was fast on the trail of four young blacks who dared to envision a future for themselves beyond the citrus groves. By day’s end, the Ku Klux Klan had rolled into town, burning the homes of blacks to the ground and chasing hundreds into the swamps, hell-bent on lynching the young men who came to be known as “the Groveland Boys.”

And so began the chain of events that would bring Thurgood Marshall, the man known as “Mr. Civil Rights,” into the deadly fray. Associates thought it was suicidal for him to wade into the “Florida Terror” at a time when he was irreplaceable to the burgeoning civil rights movement, but the lawyer would not shrink from the fight—not after the Klan had murdered one of Marshall’s NAACP associates involved with the case and Marshall had endured continual threats that he would be next.

Drawing on a wealth of never-before-published material, including the FBI’s unredacted Groveland case files, as well as unprecedented access to the NAACP’s Legal Defense Fund files, King shines new light on this remarkable civil rights crusader, setting his rich and driving narrative against the heroic backdrop of a case that U.S. Supreme Court justice Robert Jackson decried as “one of the best examples of one of the worst menaces to American justice.”

This was really well done.  I, sadly, did not know this story nor much about Thurgood Marshal other than Brown V. Board of Education and his eventual seat on the Supreme Court.  To say this was an enjoyable read would not be true, although the author does add the humor of real life to the tense story (those times were certainly welcomed and appreciated), but I did learn a lot and was glad I picked it up.  To be honest, I can’t remember where I saw this or heard about it, but I’m glad I did.

I will say – it is long (434 pages – with tiny type), and there are a lot of details and a lot of characters to keep straight.  I think the struggle with books like this is to make it readable for the audience while still including the details necessary to give a true picture.  I think being able to navigate that fine line is a challenge for modern day non-fiction authors – unfortunately readers’ attention spans are not getting longer.  I thought King did a decent job at this, and the moments of “skimming” to get farther along in the story were very few.

Podcasts – I listen to podcasts on the Stitcher App on my Android phone – but I believe all of these are available through iTunes as well if you are an Apple person.  (10 years ago, the previous sentence would have made NO sense! Wow, the machines are running our lives!)

….These Are Their Stories: The Law & Order Podcast 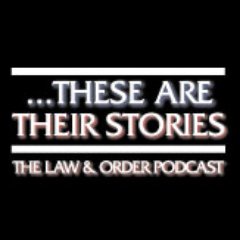 ARE YOU KIDDING ME!!!???  I found this podcast this week and knew I had found my people.  This podcast is hosted by a husband and wife team who are true crime authors and also work in Public Radio.  Each episode recaps Law and Order episodes (original, SVU or Criminal Intent) with famous or semi-famous guests (actors, authors, podcasters, journalists, musicians, etc).

a. I am not alone in my love of Law and Order and

Slow Burn: A Podcast About Watergate

“You think you know the story, or maybe you don’t. But Watergate was stranger, wilder, and more exciting than you can imagine. What did it feel like to live through the scandal that brought down a president? Join Leon Neyfakh for an eight-episode podcast miniseries that tells the story of Watergate as it happened—and asks, if we were living through Watergate, would we know it?”

So very, very good.  I have been a Watergate nerd forever, but a lot of the details this podcast brings to light are things I hadn’t heard or remembered. It is not politically wonky – so if you don’t geek out on all things politics you can still enjoy the story.

Well, that’s all I’ve got for today. Let me know if you check out any or all of the above and if you liked any of them – but only if you want to, no pressure, I’m not the boss of you.

Next time on “If My Love Were” – Terry and April celebrate their 10th wedding anniversary.  I am writing up our “story” to add to the blog this weekend.  Not because I think anyone is all that interested in our story, but because (per the previous blog post) I’m afraid I will at one point have no memories left and need to get things written down!