Day 27 – My Law and Order addiction 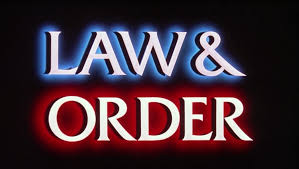 Hello, my name is April and I’m a Law and Order addict. (Please respond with “Hello, April”). I seriously cannot get enough of this show. Every time I am scrolling through the TV menu and see Law and Order listed, I stop and watch.  It doesn’t matter to me at all when the episode aired.  The early ones are just as addictive as the more recent shows.  And I tell you what, I NEVER remember having seen the episode I am watching before – NEVER, EVER.  How is that even possible?  I have a terrific memory – it really is one of my more stellar traits (so if/when I come down with Alzheimer’s, which is a real possibility given my family’s medical history, I will really be most disappointed with losing my memory for the inane), but I can never remember having seen a particular episode of L&O prior to my current viewing.

Now, given that I stop and watch the television program whenever I see it on – I even prefer to fall asleep to episodes with my sleep timer on (you will never see only one episode of Law and Order on – they always come in multiples – so it provides a good background for a 45 min. sleep timer setting); how is it possible that I have never re-watched any episode?  I mean I know the show was on for like 20 years or something, but still it does not seem possible to never have a re-watch. It is a weird thing to ponder.  Or I am just weird. Or both.

Anyway, I think I know the reason for my love of Law and Order – it is three-fold…

1. Beginning, Middle and Ending – You have your crime, your law enforcement (LAW) and your court case (ORDER).  With very few exceptions, every story is resolved within one hour using the same format – and somehow it never gets old. At least to me.

2. Amazing guest appearances – if you are ever bored, Google guest appearances on L&O – you will be amazed at what pops up – Phillip Seymour Hoffman, Jennifer Garner, Clair Danes, Allison Janey, Courtney B. Vance, the list goes on and on – in the 90s tons of soon to be big stars were guests on Law and Order.

3. The iconic voice over intro and theme music – tell the truth you are quoting it right now as you read this…”In the criminal justice system, the people are represented by two separate, but equally important groups…” and then the bum bum…now hum the theme song – you know you have it committed to memory!  It just doesn’t get more classic than that intro.

Dick Wolf is/was a genius – is he still around?  If so, could he bring back Law and Order?  The other incarnations of the show aren’t nearly as good – although SVU has had a nice long run – but I really haven’t been able to watch it since Stabler left (is he still gone?) and Arden was born – there were too many kids having bad things happen to them stories so I needed to step away.

I’ve read that they are doing a Law and Order series based on the Menendez brothers’ trial starring Edie Falco.  It is a mini-series format and it is all about one story – so that is a different formula from the original series.  But I will watch it – just to make sure they still do the “bum bum” between the scenes.